You are using a web browser that may not support the design features on this site.

For the best experience, please switch to another browser. We recommend Chrome or Firefox.

Meet the Team at CFS Dental

We invite you to take a moment to learn about us by reading our biographies below. We look forward to welcoming you to CFS Dental. 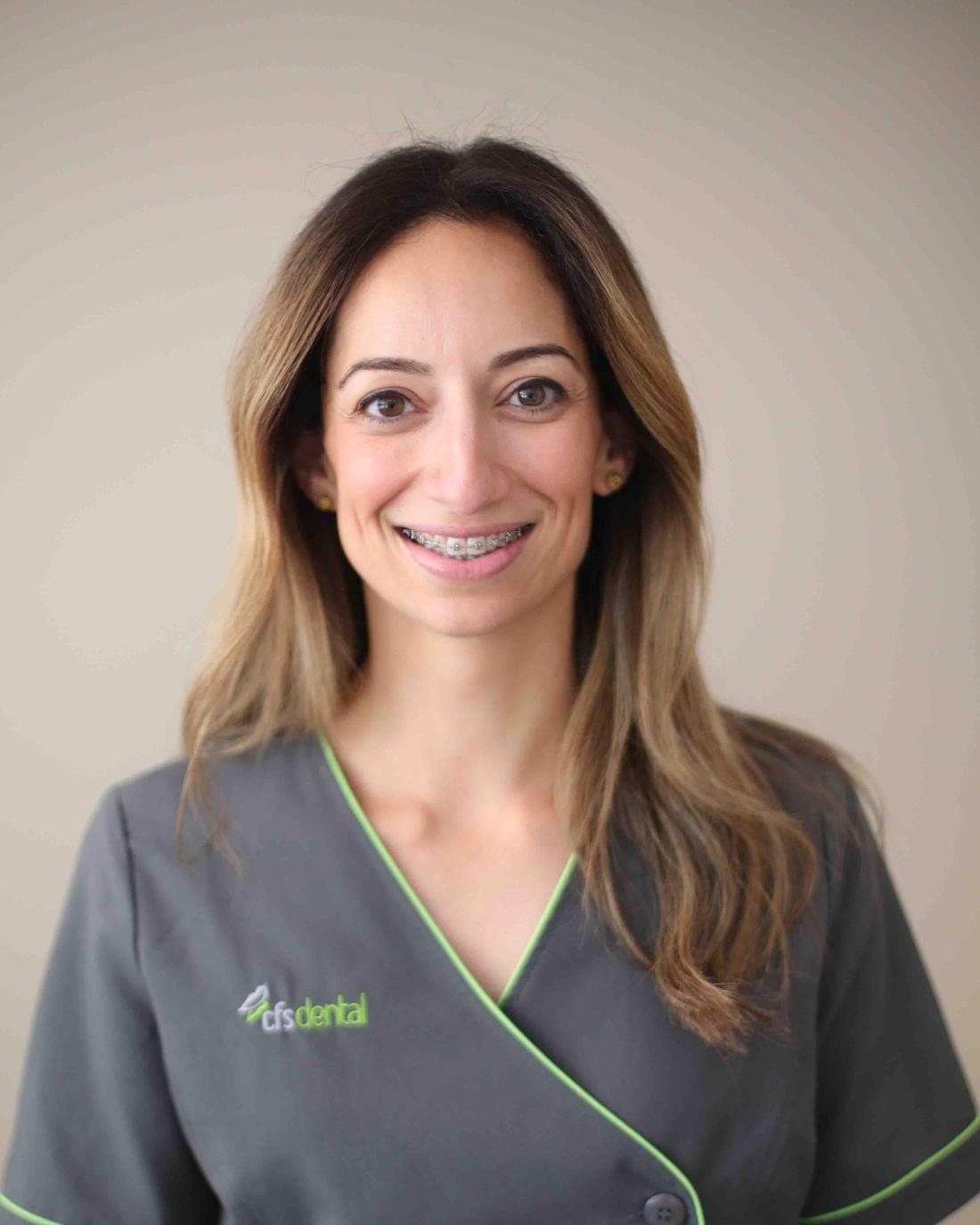 Dr. Marian Boulos grew up in Melbourne, she graduated from the University of Melbourne in 2008 and later moved to Sydney in 2012.

Dr. Boulos has worked alongside high profile dentists in Melbourne and Sydney and is a highly motivated clinician who strives to provide the most current treatment modalities to patients. She attends continuing education courses and seminars on a regular basis.

Dr. Boulos has worked at family and cosmetic practices, having gained vast experience in treating patients of all ages. She endeavours to place a strong emphasis on preventive dentistry and patient education. Marian is passionate about dentofacial growth and development in children and is a member of the International Association of Orthodontics.

Dr Andrew Ng migrated to Australia from Hong Kong to continue his studies at the University of Sydney, where he graduated with a Bachelor of Dental Surgery in 1975.

In year 2 of school he started dating his future wife Dr Clarissa Szeman, The two married four years later, spending the first two years of their marriage working and traveling around Europe. They returned to Sydney in 1980 and bought an established dental practice in Oatley in 1981. They subsequently moved to live in Oatley a year later. He taught briefly at the Department of Restorative Dentistry at the University of Sydney in the early 1980's before starting their family shortly after.

Dr Ng has always had a passion for his dentistry. He continues to invest time in continuing education to bring the latest techniques and technology to his patients. He is a member of  many ADA affiliated Dental societies and enjoys their many scientific and social events, both interstate or overseas.

You often hear him say, "The day I stop learning is when I retire from living.... I ain't going anywhere yet!"

Gifted with good dexterity and compassion, Dr Ng has strived to bring the highest quality of dentistry to his patients. With a penchant for the State of the Art technologies, he is always looking out to acquire the latest dental equipment that enhances his desire to excel in what he loves most, Dentistry.

The culmination of his wide range of experience, knowledge and attention to details is reflected in his current surgery design where " Functionalist, Efficiency, Aesthetic, and Technology" blend seamlessly together. He refers to this as FEAT, a principle he adheres to in his practice of dentistry. Take a look at the Google Virtual Tour and see for yourself!

In his spare time, Dr Ng is a keen bicycle rider, a typical MAMIL who can be seen riding around Oatley in the early hours of the morning and having coffee in a local cafe with his riding buddies.

He now loves riding for various charities such as the MS society, Chris O'Brien live House, etc... The latest being a challenging ride from Perth to Broome in support of The Black Dog Institute in Sep 2017, where he was proudly awarded a yellow jersey for the top two fund raisers.

I always knew I wanted a career in healthcare. After working full-time as a baker and starting my family, I was nervous to transition back to studying. I eventually completed a Bachelor of Oral Health at The University of Sydney Dental School and graduated as an Oral Health Therapist enabling me to possess qualifications in Dental Therapy and Dental Hygiene.

As an Oral Health Therapist, I am strongly committed to applying a holistic approach and fostering positive attitudes to Oral Health.

I am passionate on helping my patients understand the link between their mouths and their general health whilst establishing a strong focus on prevention.

I enjoy treating adults and children alike whilst working on removing any anxiety or fear associated with dental visits by creating a comfortable and pleasant experience for my patients.

Outside of work I enjoy spending time with my family and cooking up a storm in my kitchen. 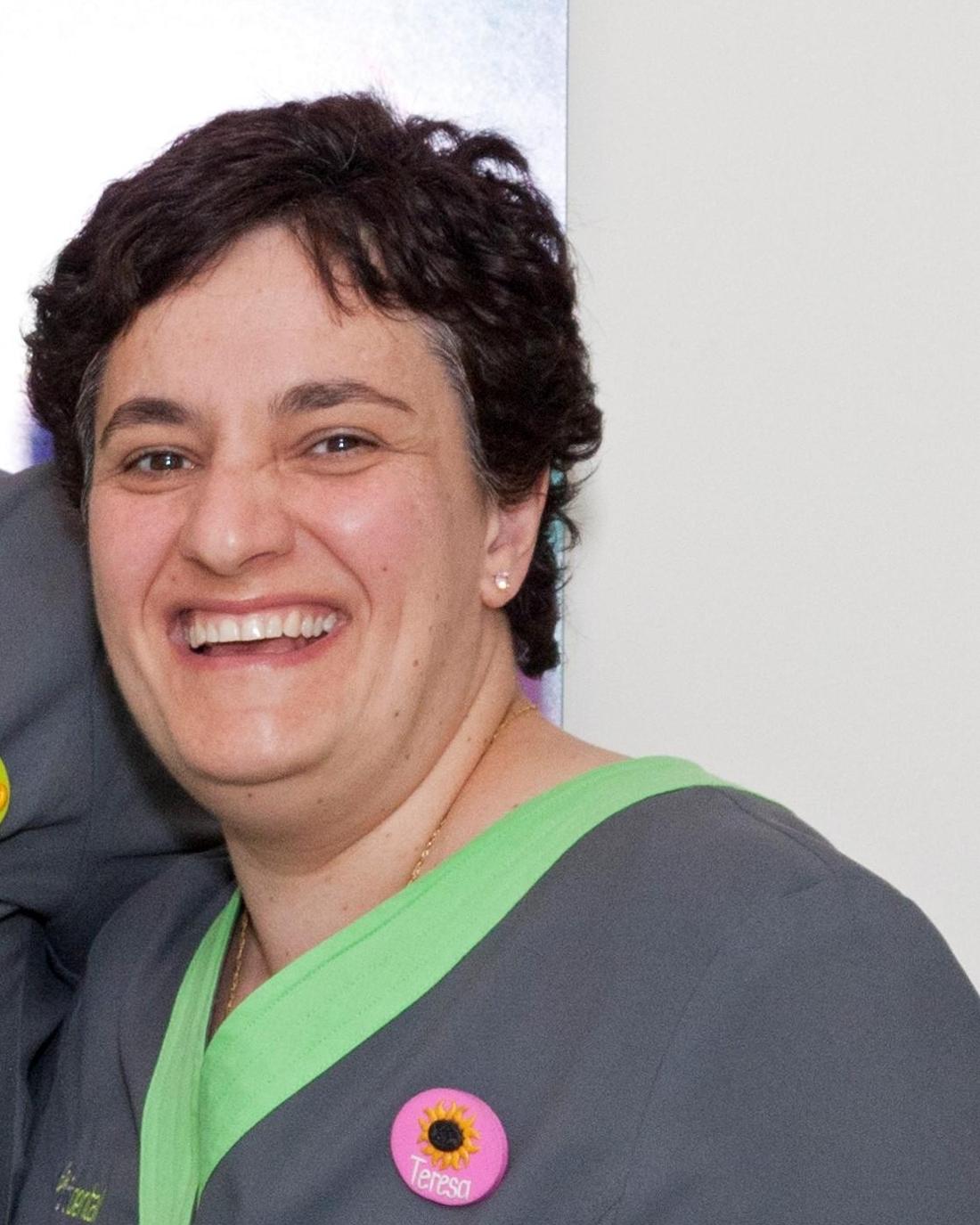 Teresa has been a staff member at Oatley CFS Dental since 1990 and has seen a lot of changes in dentistry, all for the better. She started her employment as a dental assistant, and now her role is at the front desk in reception and general management.

'I have been a staff member with CFS dental since 1990 and have seen a lot of changes in dentistry, all for the better. I started my employment with CFS dental as a dental assistant, and now my role is at the front desk in reception. I love working in the dental industry. I enjoy meeting new people and helping our wonderful patients. I am proud to be part of a happy, supportive team that provides quality dental care and enjoys our working days together. Outside of work I enjoy spending time with my family, being in my vegetable flower garden and love my crafts.'

Teresa's prodigious capacity to remember every detail of our patients is just amazing. She is simply indispensable in the day to day operation of the practice.

Gifted with the most gentle and caring nature, our local girl Amanda, is simply CFS personified. In the nine years since Amanda began working at CFS, all patients, old and young, have come to expect her ever genuine smile and warmth.

'Hi, my name is Amanda I am a senior full-time Dental Assistant at CFS. I have been in the dental industry for over 10 years. I have completed my Certificate III in Dental Assisting and Certificate IV in Oral Health.

As a member of the CFS team, I have participated in many Prime Practice workshops as well as other dental related courses yearly with my colleagues. CFS dental focuses on continuing training and development for all staff. So we are always looking at new ideas and concepts to help benefit the practice and most importantly our lovely patients.

I have been with CFS dental coming up to 9 years. I enjoy my work, and all that CFS has to offer. I am a born and bred local Oatley girl. It is great to live so close to work. At CFS dental we are a happy family friendly practice, and I enjoy the patient relationship that I have with both our young and older patients.

Outside of work I love spending time with my husband Jarrad, family and friends. I love to travel when I can. I am also part of a local outdoor fitness group which I attend classes weekly. I do play the guitar, and I love singing and dancing. I am quite an active person and enjoy the outdoors. I love the beach, going for a bike ride, walking or just having a social game of tennis with my friends.' 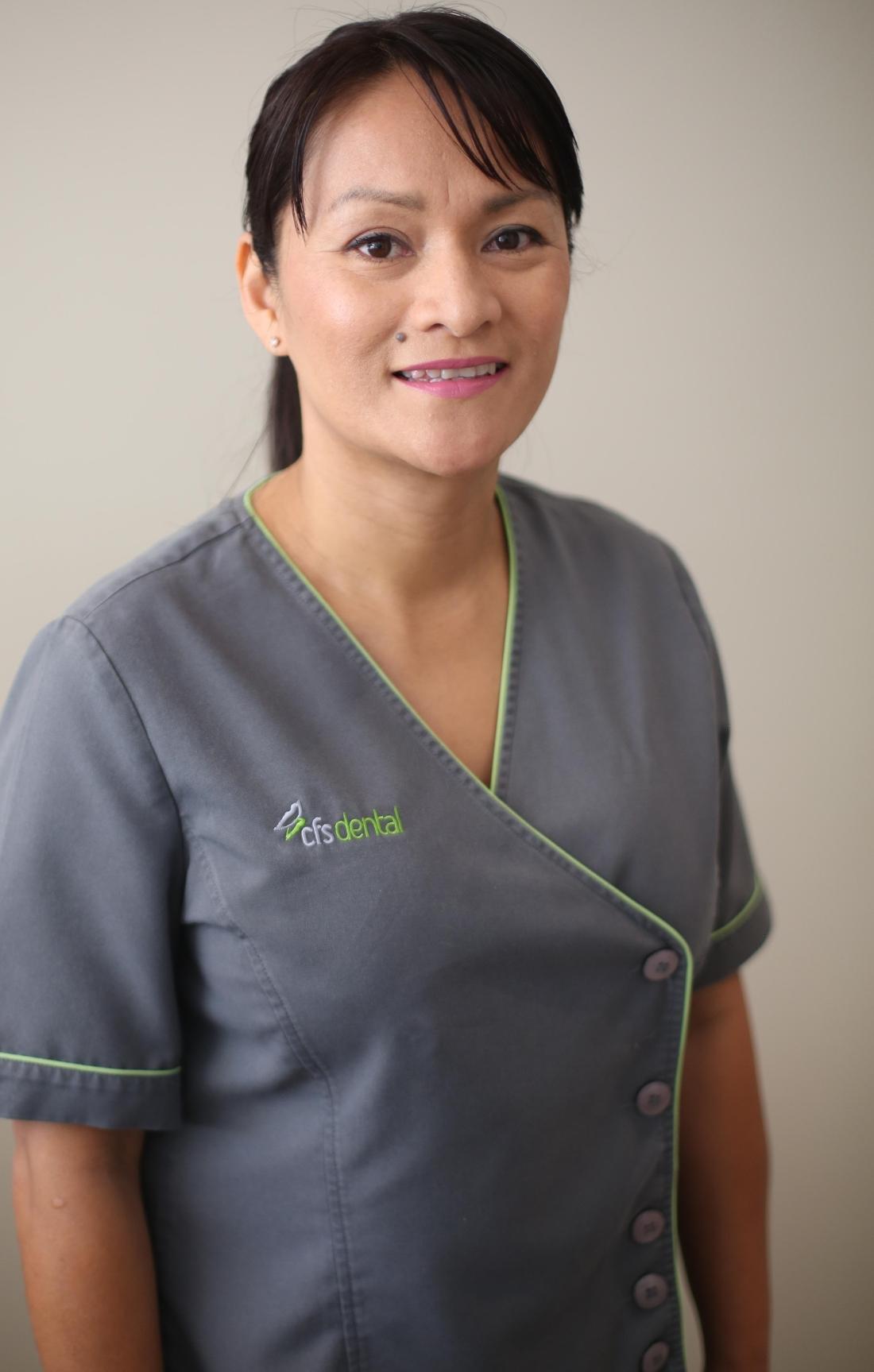 I have a passion for working with people in the health industry and proud to work with such a fantastic team at CFS Dental, who aim to give clients the best quality service using modern technology.

Working with children gives me great joy, as a mother myself to a 9-year-old girl and having previously worked with children for over 14yrs as a Nanny in London.

Outside of work I enjoy cooking, baking, gym, travelling and going to the beach. 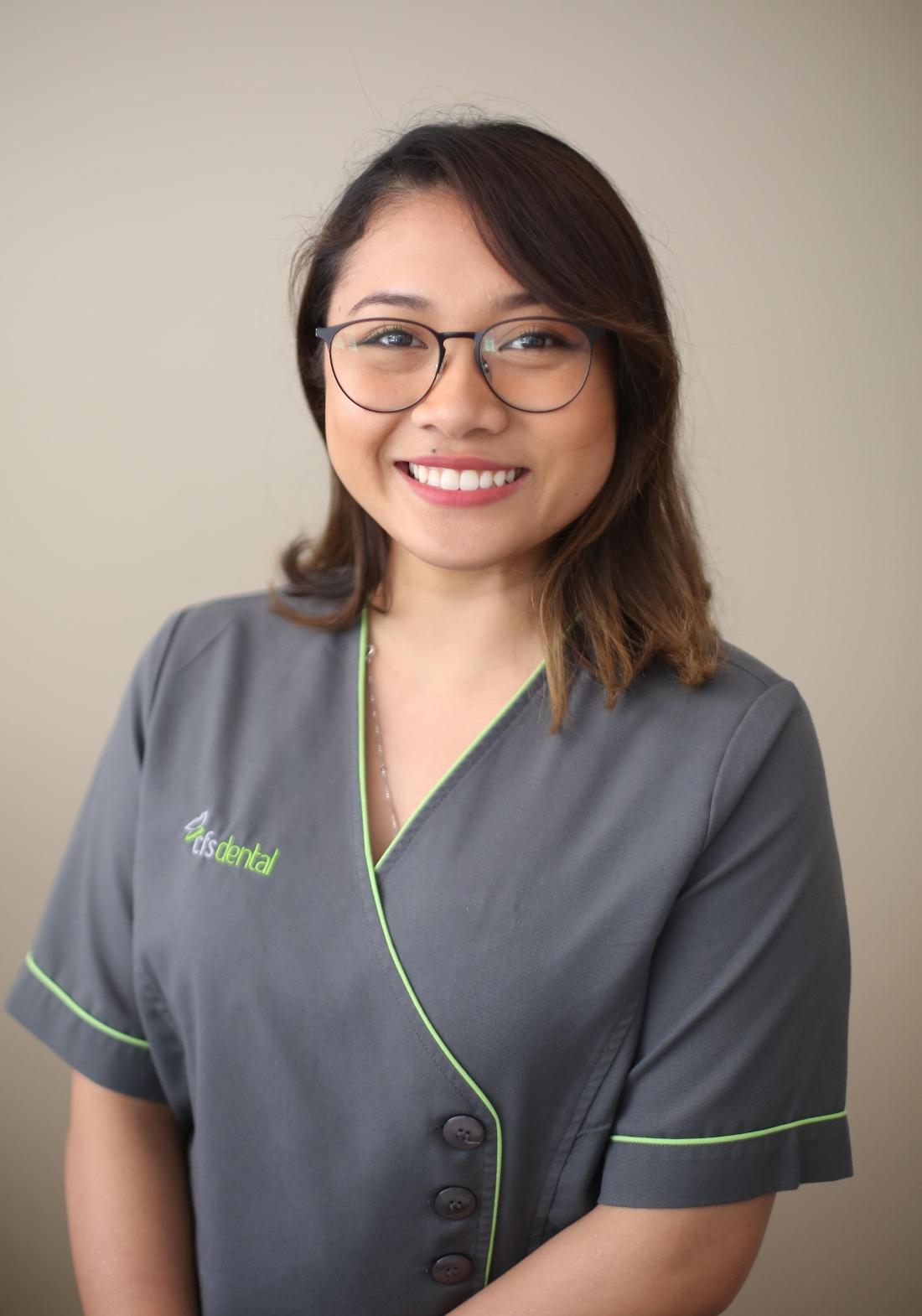 Hello, my name is Musha.

I am one of the Dental Assistants at CFS Dental. I have been in the industry since 2014 straight after completing my Certificate III in Dental Assisting. In my free time, you will find me with my partner walking our dog, Scooby. I enjoy reading, watching movies and travelling around the world.

A Healthy smile is just a click away.
Request an Appointment
Like us on FacebookWatch our Youtube VideosLeave a Google ReviewVisit us on YelpBingFourSquare
Any surgical or invasive procedure carries risks. Before proceeding, you should seek a second opinion from an appropriately qualified health practitioner.
Contact Us Today
Give Us A Call
CFS Dental - (02) 9570 6999
Send Us an Email
Expanded Details View
This Patient's Experience
Loading Testimonial...
Loading Case...